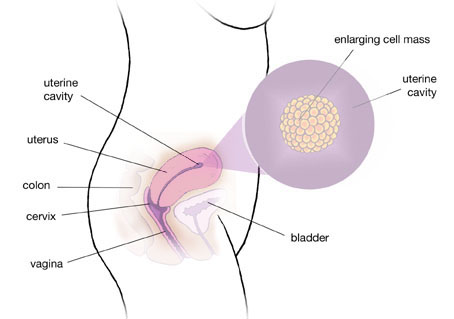 Find information about being three weeks pregnant. In the third week of your pregnancy it’s a game of wait and see. It’s too early to take a pregnancy test, so hold your breath, cross your fingers and hope that nature’s magic is taking place inside your body.
By the third week of your cycle you should have ovulated. There is a small window of between 12-24 hours after your egg has been released in which fertilisation can take place. This is why having sex a few days before and during ovulation is so important.

Conception takes place in the fallopian tube, where a successful sperm will break through the lining of the egg. The fertilised egg will then split into two cells, then four, and so on and so on, and slowly make its way to your uterus where it releases enzymes that eat away at the uterine lining so it can burrow its way in and make itself as secure as possible. By the end of the week your embryo will be made up of 500 cells. Talk about speedy development!

· There is no way of telling when an egg has been fertilised – you won’t feel anything and it won’t show up on a test straight away. Pretty much all you can do is wait patiently, but you may experience a couple of early signs of pregnancy.
· About a third of women experience implantation bleeding around nine days after conception, when their fertilised egg embeds itself in the lining of the uterus. This spotting looks like a light pink or brownish discharge.
· Some women may start to experience the very first signs of morning sickness in this week as hormonal changes start to make you more sensitive to certain factors, and your sense of smell and taste are heightened.
· After implantation, your body will start to produce the pregnancy hormone hCG. While you’ll be dying to take a home pregnancy test, it’s unlikely you’ll get a definitive result just yet.
Your health and fitness during pregnancy

Keep taking that folic acid because it will help keep a developing foetus healthy. Folic acid, or B9 as it’s also known, helps to:

· Produce DNA, and is also a key component in spinal fluid
· Prevent the chances of miscarriage
· Prevent neural tube birth defects, such as spina bifida. Around 2.5 in every 10,000 babies born in Australia each year are born with a neural tube defect.
If you have any appointments with doctors or dentists, warn them that you could be pregnant. X-rays can be harmful to the early development of a foetus so it’s better to be safe than sorry. The same goes for pesticides, poisons and harsh chemicals that you may come in contact with.

With around 20 per cent of all pregnancies in Australia ending in miscarriage there is a good chance that you or someone you know has experienced pregnancy loss. Knowing what to expect, what happens to your body and how it affects your future can all help you to cope.
What is miscarriage?

Sometimes, women will experience cramping and heavy bleeding, but for others there are no symptoms and the foetus dies but stays in the uterus. This is known as a ‘missed’ or ‘silent’ miscarriage and women are usually given the option of having a surgical procedure or waiting for nature to take its course and for the foetus to be passed from the uterus.

How common is it?

It is estimated that around 20 per cent of pregnancies end in miscarriage. But some studies* suggest that the actual rate of early pregnancy losses could be as high as between 60 and 75 per cent of conceptions – with the vast majority happening before a woman realises she is pregnant.

However, the rate of miscarriage does increase as women get older. The risk of miscarriage among women in their early 20s is about 12 per cent. By the late 30s the risk is closer to 25 per cent and by the age of 43 more than half of pregnancies will miscarry.

Why does it happen?

It’s important to remember that there is almost always nothing that could have been done to prevent a pregnancy being lost and nothing that can be done to hang on to a pregnancy that is destined to end in miscarriage.

The vast majority of miscarriages are unexplained, partly because they are not usually investigated until a woman has two or three in a row. But a random genetic abnormality is the most common cause of miscarriage.

About nine out of 10 genetically abnormal pregnancies will not survive past the first trimester. In normal human cells there are 46 chromosomes, which contain DNA and genes. When cells have the wrong number of chromosomes, the error is known as aneuploidy – the best-known example of which is Down syndrome, which is the result of having three copies of chromosome 21. Around seven out of 10 first trimester losses are caused by chromosome problems.

What is recurrent miscarriage?

While miscarriage is usually a one-time occurrence, up to one in 20 couples experience two miscarriages in a row and one in a hundred suffer three or more – this is known as recurrent miscarriage.

Some of the known causes of recurrent miscarriage are:

· Abnormalities of the uterus
· Blood clotting disorders
· Chromosome abnormalities
· Immune disorders
· Hormonal disorders
· Infections
· Lifestyle factors such as smoking, alcohol and recreational drugs
When do you need to investigate?

If you have three miscarriages in a row, you will usually be referred to a specialist who may order some tests to see if there is an underlying cause. However, more than half of the time these investigations don’t find any explanation for the miscarriages – and this is good news, as it means you are likely to achieve a healthy pregnancy in the future without medical intervention.

Because fertility declines and the risk of chromosome problems increases as we age, women in their mid to late 30s might be referred for investigations after two consecutive miscarriages.

What are the chances of a subsequent pregnancy being successful?

Where no cause for repeated miscarriage has been found, the risk of another pregnancy failing is similar to the age-related risk of having a miscarriage.

Is IVF an option?

Random chromosome problems are thought to be the cause of the majority of miscarriages, where a genetically abnormal embryo implants in the uterus, but is destined to fail. While the advice to couples will often be to keep trying, the emotional toll of repeated miscarriage can be immense. Also, the chance of chromosome errors increases as women get older.

There are now techniques available that allow scientists to screen an embryo in the lab during the IVF process and to ensure it has the correct number and sequence of chromosomes in the DNA.

The technique, known as CGH (Comparative Genome Hybridization) is usually recommended for older women who have suffered recurrent miscarriage or repeated IVF failure and can vastly improve the chances of a successful pregnancy and healthy baby.

· Start playing the waiting game!
· Keep yourself occupied to take your mind off things – try to go about your business, pamper yourself and try to relax.
· Get prepared by buying a pregnancy test for the following week. Only if you can trust yourself not to use it before that though!
· Invest in a box of tissues – you might find yourself getting strangely teary watching human-interest stories on the evening news.
· Keep your fingers (and toes) firmly crossed.
Learn when to take a pregnancy test, and discover what happens during your fourth week of pregnancy.